Rahway River Trout Unlimited is one of the newest New Jersey Trout Unlimited chapters. We are an organization of men and women that strive to protect our cold freshwater fisheries throughout the state. Our members meet once a month, discuss many topics from conservation to fishing. We also go on fishing trips throughout the year, conduct river cleanups, host fly tying events, and partake in many other activities. If you like fishing or just want to give back to the environment then RRTU is for you. So tell a friend, come on out and enjoy yourself, learn a few new things, meet some new fishing buddies, and perhaps even consider joining our Trout Unlimited Chapter - #155. We meet at the Cranford Community Center for our General meetings and Fly tying nights.

We have a lot to be thankful for this year. 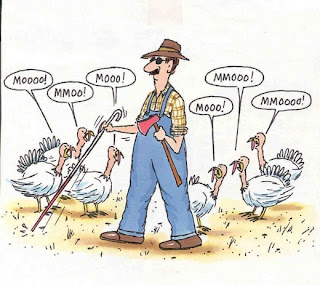 Happy Thanksgiving to all!
Posted by Unknown at 12:03 AM No comments: The crisp day began in the morning mists with check-in, hot coffee, and some rules orientation.  The morning rounds consisted of two fishing sessions and a "bye" cutting the contestants to three for the afternoon finals.  Angelo Conti, Stuart Shaffron, and John Wester battled it out until a few minutes before the bell with ANGELO CONTI taking top honors.  There was a serious amount of talent in the waters of the South Branch for this event.  Thoughtful fly selections, multiple styles and plenty of river stewardship was evident all day long.  The fellowship grew into the evenings banquet and generous amounts of camaraderie.


10 T.U. Chapters and two watershed associations were represented.  The contestants had a terrific time!

Posted by Unknown at 9:23 AM No comments: